Long time. Family photos, gray brown with age, hung on the dark wood walls. Daddy, there, with the others from his coffee picking crew before they used so many machines. How young and handsome he was! There, Mama and Daddy at the beach with friends, in then-scandalous swim suits that covered most of their bodies. Other photos, tracing a hundred years of family. Other cousins, relatives, friends, here too. 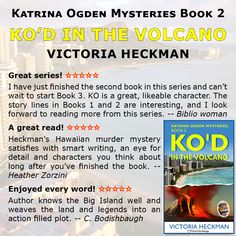 Lani sat on the sofa and listened to the tick of the clock. It matched the dull thud of her heart. Malama sipped her gin. Nearly finished now. Her son? When had she last seen him? Long time, she mused.

K.O.'d in the Volcano by Victoria Heckman

He had moved his family to Maui, to be a ranch foreman. Sam had married a haole lady from California. Malama, slightly buzzed now, decided that Sheila might not be so bad after all. She dearly loved her two grandchildren, Randy and Gina, although she saw them so infrequently. But Kekoa, her granddaughter who lived right here in Kainaliu, and whom she saw almost every day, was the apple of her eye.

Kekoa came onto the lanai. Kekoa watched the rocker curiously, circling it. A curtain of too-long bangs hid her expression. Lani appeared in the doorway.

Malama looked at her daughter. Every day this week, we come to clean and I put them back in her room. Susan Sarandon reads The Shaman's Apprentice by Lynne Cherry and Mark Plotkin, a story set among the Tirios in which a foreign visitor helps the villagers see the importance of their shaman's wisdom. William Winden reads Mary Calhoun's story of a sassy Siamese cat who gets more than he bargained for when he stows away on a hot-air balloon.

LeVar goes on his own balloon ride, takes a comical look back at some ideas for flying machines that never made it off the ground, and visits kids at NASA's Space Camp. LeVar introduces the history, heroes, stories, and music of the African-American culture that emerged from slavery while telling the story of the Underground Railroad. Inspired by Natalia Romanova's book Once There Was a Tree, about the interdependence of all living things, LeVar explores the life cycle of trees in the forest and their importance to animals, other plants, and humans.

Eli Wallach narrates the story. Two trips through the cycle of the seasons explore what makes each one special. Ossie Davis narrates Summer, which explores not just summer but also spring, fall, and winter in words by Ron Hirschi and photographs by Thomas D. And LeVar takes a look at the plants, animals, and landscapes of each season.

A little lamb uses her wits to outsmart a hungry coyote in Verna Aardema's retelling of a Mexican folktale, narrated by Olga Merediz. LeVar explores Mexican-American culture with visits to some neighbors and friends—including the musical group Los Lobos, who throw him a fiesta. Rat, a story about an inquisitive neighbor that takes a humorous look at snooping around: When does a healthy curiosity become annoyingly nosy? In an interview, primatologist Dr.


Jane Goodall explains how her own curiosity inspired her career in science and has helped her make some fascinating discoveries about chimpanzees and other primates. A trip through time uncovers the lives and accomplishments of women aviators, from the barnstorming days of Bessie Coleman to a modern-day teenage girl who's pursuing her own dream of becoming a pilot. A classic tale from Robert Louis Stevenson, narrated by Robert Guillaume, explores the human fascination with light and shadows.

LeVar discovers how a sundial uses light and shadow to tell time and gets a lesson in the art of creating shadow puppets. Anne Jackson narrates Janell Cannon's charming story about a baby bat who is separated from her mother and raised by a family of birds. When he goes exploring in the world of bats and other nighttime creatures, LeVar discovers that the nocturnal world is not just about silence and dreams.

Inspired by Samuel Marshak's book Hail to Mail, a humorous look at a simple act of mailing a letter that turns into an odyssey around the world, LeVar goes behind the scenes at the postal service to meet the people who really move the mail. Sherry Garland's book, narrated by Rona Figueroa, tells the story of a young Vietnamese woman who is forced to flee her country but takes a lotus seed with her as a reminder of her past. LeVar meets families who have immigrated to America and talks about how they are adapting to their new culture while preserving their heritage.

LeVar heads to an amusement park to ride a giant roller coaster and try a scientific approach to winning midway games.

LeVar explores the importance of signs in everyday life and visits a sign company to watch the creation of a spectacular neon display. Francisco Revela narrates Richard E. Albert's book about the lush oases of California's Indian Canyon, while LeVar discovers how precious water really is. LeVar's dog, Duke, is host for the day.

He introduces the book Martha Speaks, about a very special talking dog, and tours the neighborhood to introduce some other special canines. Angela Bassett narrates Patricia Zelver's The Wonderful Towers of Watts, which explores the beauty and courage of a community challenged daily by violence. LeVar talks with children from Watts about their hopes, concerns, and dreams for the future. On a visit to a playground, LeVar reminisces about being a little boy and growing up with his mother.

Vignettes show a young LeVar parting with his favorite blanket and being jealous of all the attention his baby sister is getting.

Matthew Broderick reads the book Owen by Kevin Henkes, and LeVar visits a company that creates comic books for children. In the book by Marjorie Priceman, a cook discovers that his local market is closed and ends up traveling all over the world to get the ingredients for an apple pie. LeVar meets chef Curtis Aikens, who shares cooking tips as well as his own story of how he learned to read as an adult. A visit to the Turkey Hill ice cream factory shows how chemistry is used to make this sweet treat.

A black barber overcomes many obstacles to save enough money to open his own barbershop in the book by Margaree King Mitchell, read by Regina Taylor. After getting a trim from his own barber, LeVar talks to the members of the a cappella singing group the Persuasions about how they stuck with their dream of becoming performers despite discouragement from people who said that a singing group without musical instruments would never make it. A young woman who wants to be a veterinarian talks about the support she's gotten from others.

Daniel Saltzman reads Eve Bunting's moving story about a homeless father and son who go from terminal to terminal in an airport, hoping no one will realize they have no home to go to. LeVar talks to kids from homeless families about why they are homeless and about life in shelters and on the streets. He also meets the father and daughter who started Common Sense, an organization that collects pennies and uses them to buy items for homeless shelters, and an year-old boy who volunteers for a food distribution charity.

Gregory Hines narrates Lloyd Moss' book about how melodies, mathematics, and the sounds of different instruments combine to make music fun and interesting.

LeVar visits the Juilliard School of Music, where he sees a conductor lead an orchestra rehearsal. A performance of a movement from Haydn's "Surprise" Symphony also helps illustrate the parts of an orchestra. LeVar shows his travel room, where he keeps maps and globes of places he's visited, and hosts a series of short visits that give a taste of what life is like in New York City, on the high seas, and in Hawaii.

LeVar dreams that he is miniature size and that everything around him is huge. When he awakes and finds things back to normal, he realizes how size can influence your perception: Things look bigger and a little scary when you're small. But as you grow, your perception changes. Tall and Mr. Small, and Zoom. Inspired by the book by David and Phillis Gershator on the process of making bread, LeVar explores the place of this staple in several cultures. A Hopi woman shows how she makes blue cornmeal bread, and cooks at an East Indian restaurant bake bread in a tandoori oven.

LeVar reminisces about his childhood with his mother and two sisters—his parents were divorced when he was 8, leaving him without a father—and visits with children who come from different types of family structures, not all of which are traditional. The Carousel, narrated by Sarah Hubbard, shows that a legacy is a special gift passed down from generation to generation.